Saturday’s plowing match went well, but the most dramatic event of the day was the one that followed – an ill-fated attempt to harness together 12 horses to pull some logs.

In the first two photos below, you can see that the first 8 horses worked together fairly well.

But horses nine, ten, eleven, and twelve had other ideas.

From the moment the final 33.3% of the hitch entered the pasture, it was apparent that the horses were not comfortable with one another. The two teams that were harnessed together in a straight row had never worked together before. They tried to bite and push and rough with their unfamiliar neighbors, and it took several minutes for the squad of horsemen in the pasture to get them calm enough to even try to add them to the hitch.

As they did, I asked the person standing next to me to make a prediction. She said, “I think it’s going to be bad.”

After several more minutes, the team of 12 horses and half-a-dozen horsemen were ready to give the big pull a try. Almost at once, the front row of four horses broke away from the rest of the hitch as the wooden doubletrees linking them together splintered. The four runaways whirled and whirled around like a confused tornado, and for just a moment it appeared they might head for the open gate of the pasture fence, behind which hundreds of spectators were watching. A cool-headed horseman ran up and tried to pull the gate shut, but it was lashed open to the side of the fence with a piece of knotted rope twine. Someone else quickly produced a pocketknife, and the gate was secured.

Meanwhile, the panicked horses in the pasture continued to weave and sputter. All at once they collapsed in a tangle of legs and harness. From my vantage point, it appeared that one of the horses got completely rolled over by one or more of the others.

It looked like a bad situation. The horsemen sprinted to the pile of horses and started to cut harness and pull the horses away one by one. The horse that got rolled was the last up, but when he did get up he sprang to his feet. Everyone was okay. 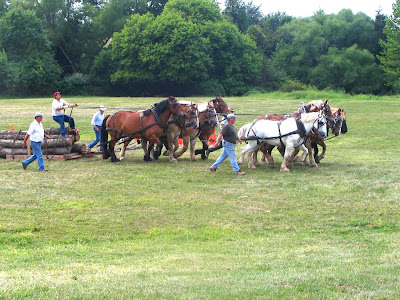 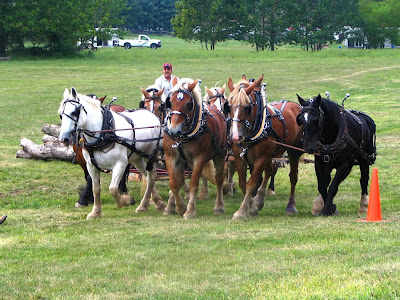