Oats are the grain that horses like best, at least by reputation. At Howell Farm, the draft horses receive oats before or after a bout of hard labor. They do seem to enjoy them.

Intern Tom planted this year’s crop of oats back in early April, in the long field nearest the farm’s main entrance. He planted oats with hulls, for the animals, and hulless oats, which are more suitable for us humans.

That was a day full of optimism, with predictions of Tom returning months hence to enjoy a bowl of homegrown oatmeal. It appears now that this optimism may have been misplaced. Unfortunately, a double attack of gooey bug larvae (from cereal leaf beetles) and thistle (a prickly weed) have brought about the premature demise of all the animal oats, while leaving the human oats in jeopardy.

Last week, the decision was made to mow down all of the animal oats and salvage the crop for straw. The human oats were spared, as they're in better shape, but remain in danger.

According to Farmer Rob, the human oats are also more valuable, and thus worth more effort to try to save. That effort would include pulling thistle out by hand. As for the leaf-munching larvae, they seemed to prefer the animal oats, which were planted a week after the human variety. In any case, the larvae are now transformed into beetles burrowed into the soil, and no longer a major threat.

I will keep you all updated on the situation. Here’s a picture of a thistly section of the oat field as it appeared this morning: 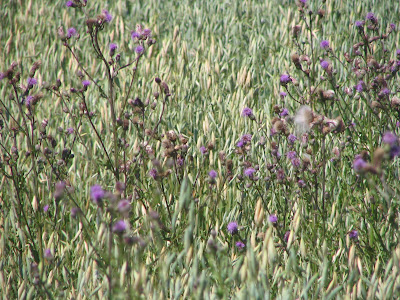