LAMBS TO THE SLAUGHTER

At Howell Farm, "Hackettstown" means the livestock auction. The word is both descriptive and a euphemism. When one of the farmers here noticed that Molly The Cow is looking quite old these days, he said, “Maybe it’s about time she pays a visit to Hackettstown.”

This morning, Farmer Jeremy loaded ten lambs into a trailer and pulled it away to Hackettstown. I asked him how he decided which lambs to keep at the farm and which to sell. His method is this:

At birth, he tagged all the female lambs who were twins and whose mother was able to deliver without assistance. He figures that, genetically, these lambs are the most likely to grow into fertile ewes.

The rest of the female lambs and all the male lambs will be sold.

The lambs in the trailer seemed quite calm as Jeremy prepared to drive away. They ate their hay quietly. I then walked down to the sheep barn to see how the mothers were holding up. They too, were quiet and eating hay. As far as I could tell, nobody was upset about anything.

As for myself, I know the lambs here lived a romping, free-range life – if only for three months. I’d feel no qualms about biting into a Howell Farm lamb chop. In fact, given the choice. I’d prefer the chop from Howell to chop from anywhere else. I was the first human to see many of these lambs after they were born, and I was one of the last to see them before Jeremy drove away. I know where they’ve been and how they lived. Maybe the only better situation would be if they were also slaughtered right here on the farm. Then I’d also know how they died.

(As a counterpoint to that last thought, I should note that I wouldn’t particularly want to be the guy doing the slaughtering. But I think I could, if it came down to it.) 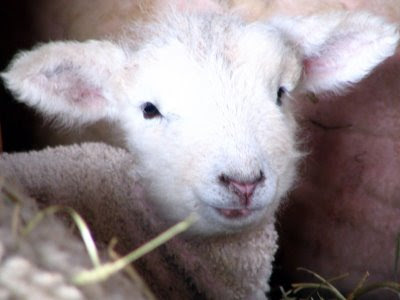 Posted by About the Blogger at 10:29 AM No comments: