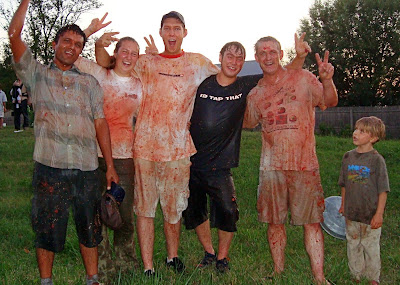 You should have seen the other guys...
Posted by About the Blogger at 5:21 PM 2 comments:

GRABBED FROM THE HEADLINES

At what has quickly become known as the nastiest tomato fight this side of Buñol, a community of local organic farmers in Central New Jersey gathered here Sunday evening to dispose of their rotting produce in style.

On this day, the victory was carried by an organized band of underdog historians.

A team of five combatants from Howell Living History Farm attacked early and often, delivering pregnant payloads of tomato pulp into the ranks of the enemy at a disorienting rate. Though a combined force of farmers from North Slope Farm, Gravity Hill Farm, Cherry Grove Farm, and Cherry Grove Organic Farm outnumbered the historians nearly tenfold, numerous attempts at a frontal assault were repelled.

"It was ugly," recounted Farmer Natalie of Cherry Grove. "It was like that movie 300. Except that this time somehow the Spartans managed to win."

Farmer Rob of Howell Farm is credited as the architect of the successful battle plan. The historians are believed to have stolen and then pre-positioned stockpiles of tomatoes in strategic locations before the fight began. The squad's secret weapon – specially modified lacrosse stick tomato launchers – enabled the outnumbered farmers to bombard their enemy from long range.

"Next year I'm going to wear a helmet," said Farmer David of Gravity Hill, who was knocked out of the fight early and forced to watch from the sidelines.

Superior battlefield communications also aided the historians. Farmer Pam of Howell Farm, designated along with her two-year-old daughter as a "United Nations of Tomatoes" non-combatant, relayed secret code words over a speaker system to give the historians a heads-up on developing counterattacks.

"Knowing is half the battle," said Farmer Rob. "Thanks honey."

The allied forces best chance for victory came when one of their attackers was able to skulk behind the historians' lines and make a grab for one of the powerful lacrosse stick tomato launchers. That attempt was beaten back.

"The other Howell Farm interns and I spend a good deal of time in the intern weight room, and sometimes at the end of a long day I wonder why I'm doing it," said Farmer Jared, who defended the launcher. "As it turns out, forearm curls are exactly like trying to hold onto a lacrosse stick after you get bum rushed by an enraged organic farmer. I felt well prepared."

The last hope for the allies faded after one of their fighters made the mistake of referring to Howell Farm's commando, Intern Ram, as a "Crazy Sri Lankan." Ram, from Nepal – a landlocked country northeast of India – turned to a stash of destructive Brahmin Brandywines he was holding in reserve and simply obliterated all remaining enemy forces.

"It was good," Ram said of the carnage.

No serious injuries, excepting pride, were reported after the battle. Nomad Pizza of Hopewell fed all the warriors without discrimination, though they be victorious or defeated.
Posted by About the Blogger at 3:49 PM 2 comments: