I learned something from the newspaper today:

The average daily temperature in New Jersey in June and July was higher than it has ever been in the 114 years weather records have been kept.
Posted by About the Blogger at 11:44 AM No comments:

CATTLE HAVE A SIXTH SENSE

Ben the horse continues to inspire. I like his tenacity.

At evening letout last night, Intern Peter and I deposited Ben in the round pasture before continuing our chores. Not five minutes later, Ben teleported back to the barnyard. We found him over near the fence of the back pasture where the farm’s four biggest horses spend the night.

I don’t speak horse, but if I didn’t know better, I’d say little Ben was talking trash to Bill, Jess, Chester, and Jack. He was doing this from the safety of his side of the fence. The other horses looked furious – they were pacing and rearing up and letting out horse snarls. Given the chance, there’s no doubt they would give Ben a severe equine beatdown.

I have yet to catch him in the act, but it’s become apparent that Ben is stepping over a low part of the pasture fence and then going wherever he feels like.

Peter and I decided we’d leave Ben in the tubyard for the night, which has a higher fence. But Ben absolutely refused to go, like a 1,500-pound boulder. Even the appearance of a horsewhip didn’t help.

Peter was, however, eventually able to goad Ben back into the barn.

The last I saw of Ben, he was clipped into his stall with a rope and both doors to his section of the barn were securely fastened. The previous night I had left these doors open. This time there would be no escape.

I arrived back at the farm at 7 a.m. this morning, the first man on the scene. Whom did I spy from across the pasture, grazing contently? Ben!

I proceeded directly to the barn to see what had happened. Inside, Ben’s rope was broken (the third he’s broken this week) but both doors were closed just as securely as I had left them. For the next ten seconds I contemplated the possibly that Ben was one of those vampire horses you hear about who can step through walls. And then it struck me what Ben had accomplished, and I was even more impressed.

This is my reconstruction of the events, which may be dramatized:

After breaking his rope with a powerful thrash off his head, Ben found the doors of the barn impenetrable, kick like the devil though he may. Sizing up his options, he saw his only chance for escape was to perform a dangerous routine of horse gymnastics. He vaulted directly forward from his stall up into the manger where his food gets delivered. Then he vaulted out of his manager, at great peril, down into the narrow alleyway on the other side. Having survived the danger of a broken leg, he turned right and discovered a false wall in the barn (the door from the alleyway into the central area of the barn, which is under construction, is currently a hanging piece of heavy canvas). He pushed through. In the pitch black, he then navigated over the uneven, debris-strew floor and discovered another door that had been left open, leading into the area where the rest of the horse stalls are located. From here, Ben quickly found an open doorway to the outside … and soon breathed in the fresh night air of freedom.

Today, I’m told, the project on the farm is to raise all low areas of fencing. 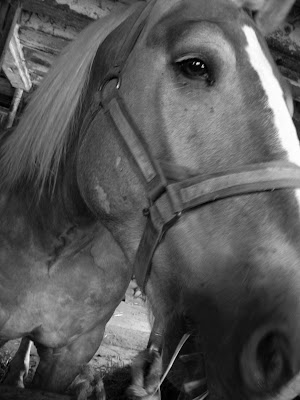