Farmers Ian, Peter, and Matt have been replacing the cedar shingle roof on the carriage barn. Pics below. 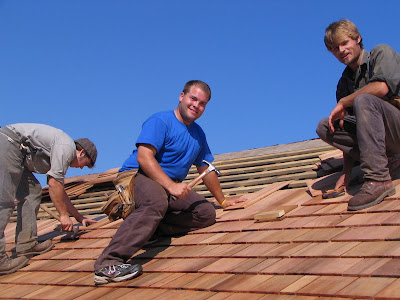 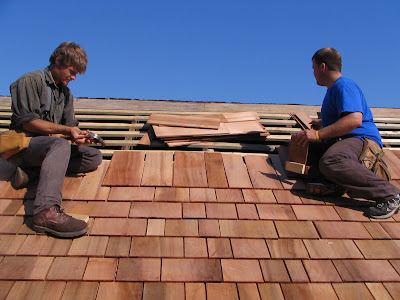 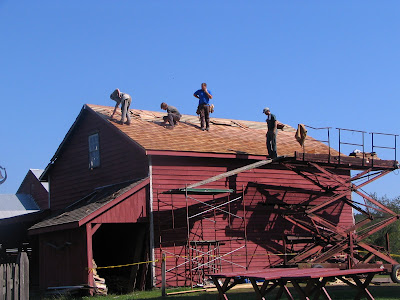 Last week I blogged a little about the “Farm School” and “Back to School” programs at Howell Farm. Two longer articles about these events, destined for the farm’s monthly newsletter (The Furrow), are now ready.

The Furrow is typically mailed to members of “The Friends of Howell Farm” who pony up $40 for a yearly membership. We live in an age when information wants to be free, however, so here, just take it:

From the desks of the historic Pleasant Valley Schoolhouse this month, school children of 2008 got a taste of what school was like in 1900.

On Sept. 13, Howell Farm held its annual “Back to School” program. Students in attendance participated in historical lessons that included cursive writing practice, a science lesson about beavers, and the mathematics of counting corn kernels.

“The tone is a little different,” Mills said of transforming into a 1900s educator. “There’s a slight sense of more seriousness than a teacher today would have.”

In 1900, there were 15 million school children in the United States. Today, including college students, there are about 75.5 million students.

Many students of the era would have been reading “The Wonderful Wizard of Oz,” which was published by Frank Baum in 1900. A discussion of current events would have included the devastating hurricane that hit Galveston, Texas, in September 1900, killing an estimated 6,000 to 12,000 people.

The Pleasant Valley Schoolhouse, located on Mercer County-owned land adjacent to Howell Farm, was built in 1889 to replace an earlier school located nearby. It was used as a school until 1936, and in 1938 was converted to a private residence. The building not only provided a place of instruction for area children but also served as a community center for neighborhood meetings, speakers delivering lectures, neighborhood sings, and other social activities.

Howell Farm put a theory into practice this September — that the best way to help people understand something is to let them do it.

On September 8, 9, and 10, Howell Farm hosted the Association for Living History, Farm and Agricultural Museums’ first ever “Farm School” workshop. The aim of the program is to provide living history professionals with hands-on, down-and-dirty training in historical agricultural practices.

“We set it up to be real work,” said Ed Schultz of Great Hopes Plantation in Colonial Williamsburg, one of the workshop instructors. “This is real farming, not pretend farming.”

For three days, the students practiced using horse-drawn walking plows to complete fieldwork in the same way American farmers would have from 1890 to 1930.

“I’m surprised by how many blisters I have,” reported Barbara Corson, co-chair of ALHFAM’s Farm Professional Interest Group, on Monday evening after an eight hour day in the field.

In addition to Corson, who is a veterinarian from Harrisburg, Pa., the inaugural class of farm school students was comprised of Sarah Rice of Longstreet Farm in Holmdel, NJ; Bob Sherman of Middleton Place Plantation in Charlestown, SC; and Darryl Wines of the Simcoe County Museum in Midhurst, Ontario.

“Everyone here knows a lot about something,” said Corson, who helped envision and develop the farm school program along with Schultz and Howell Farm director Pete Watson. She said she hopes the program will help living historical professionals continue to learn historical agricultural techniques when the generation that used them has passed on.

“No matter how much you read about this stuff, it’s hard to find someone to actually teach you,” she said.

For museum preparator Darryl Wines, farm school provided him his first opportunity to work with some of the farm equipment he helps care for at Simcoe County Museum.

“There’s a lot of stuff I know what it does, but I’ve never used it,” he said. “And I don’t like to talk to people about something I’ve never done. I like to have done it.”

“Everything went pretty seamlessly, other than that feeling of wanting to collapse after that first furrow because I didn’t breathe for 600 feet,” he said.

Rice, from Longstreet Farm, already uses draft animals in her work as a historical farmer. For her, farm school was a chance not only to hone her skills and learn from others, but also to share some of her knowledge.

“I’m a mule person,” she said, before explaining some of the differences. “Mules are like a semi-truck. Horses are like a sports car.”

Sherman, the historic agriculture and livestock manager at Middleton Place, will take his farm school training back to Middleton and become a trainer himself. The plantation has 8 Belgian draft horses they use for carriage rides and two young water buffalo being trained as oxen.

“The little bit of experience I’ve had [with draft animals] taught me how much I didn’t know, which is one of the reasons I’m here,” he said. “Now, when I go back, I can go and show other people how it’s supposed to be done.”
Posted by About the Blogger at 10:24 AM No comments: