Bob Hughes, one of New Jersey's preeminent beekeepers, spoke at the farm today. I learned:

- The qualities of a good beehive location are: Sunlight from early in the morning to late in the day, protection from the north wind, and a water source within half a mile.

- In New Jersey, the major sources of nectar for the honeybee are (in the order they become available in the spring): Maple trees, dandelions, black locust trees, poplar trees, and clover.

- The average lifespan of a worker bee is 6 weeks to 3 months. During the period of a worker bee's life when it goes out collecting nectar and pollen, it works from dawn to dusk.

During the question and answer segment, I asked Hughes about Colony Collapse Disorder, the mysterious bee die-off that was in the news last year. Hughes said the current health of the New Jersey honeybee is "very good to excellent." From 2006 to 2007, New Jersey lost 40% to 60% of its honeybees, according to Hughes. From 2007 to 2008, loses were down to just 3%, he said.

Howell Farm has three hives of its own, all located next to the small bridge that crosses the stream between the visitor's center and the farm. They're easy to miss. This is what you're looking for: 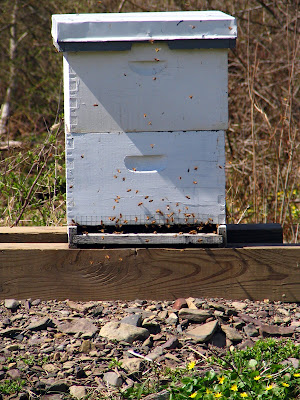 I went to a presentation on Colony Collapse Disorder last December because people keep asking me about it (I'm an ant biologist with Ms. Dani). The person giving the presentation gave the best possible summary on CCD: CCD isn't a single thing, it's a complex web of causes, which span from socioeconomic causes to biological causes. The colonies that are hardest-hit by diseases are ones that are shipped across the country to pollinate crops in California; hives that are kept in areas with diverse food sources and that aren't subjected to the stresses of moving generally have many fewer problems.

On top of all that, it's useful to remember that when we think of honey bees, we think of European honey bees, not the thousands of species of native (non-honey) bees that pollinate native species.

I also find the complex web argument to explain CCD the most compelling. It drives me crazy that scientists are busy looking for discrete causes of CCD rather than investigating whether radical ecological imbalance is the problem. The bees are our ecological canaries in the coal mine.

Anti-biologist? Jared, who are you associating with?