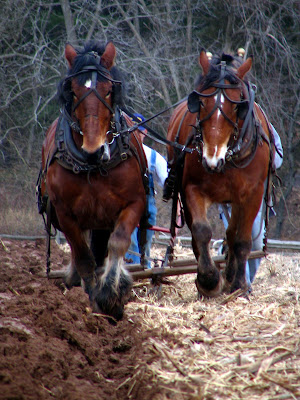 I got my first taste of plowing today. It was good. The soil I helped turn will be the future home of oats.

- The animals. We used two different teams of horses, including one team that had never been used at Howell to plow before. They worked so well that Rob and Jeremy started making allusions to plowing heaven.

- The plow. A heavy blade with handles that gets steered through the earth as the horses pull it.

- The guy steering the horses. Holds the lines on the horses, helping to keep everyone going in a straight line across the field at a happy pace.

- The guy steering the plow. (This can be the same guy who steers the horses, but today the jobs were separate). Walks behind the horses as they pull, trying to keep the plow blade straight.


Based on what Jeremy said (I'm not sure if I identified him previously, but Jeremy is the horse guy around here), the stars were aligned this morning for prime plowing. The baseline requirements to go out and plow are that the ground can't be frozen, nor can it be too muddy for the animals to get traction. In addition, the weather was cool for the horses today, the ground was especially soft, and the plow blade and all the straps on the horses turned out to be ideally adjusted on the first try.

So there I was, out in the field on my first beautiful day at Howell. Yes, my new boots where chaffing a bit, but my resolve was strong. I took the plow handles in my hands and the horses started to pull. It's not so easy to steer, I discovered. I was told it's like sailing, but I've never sailed before. I weaved like a drunken driver. If the blade starts to swing too far left, lean left to adjust. Too far right, lean right. The concept is simple, but the trick is in not over-adjusting in the heat of the moment. I'd say I did respectable enough for a maiden voyage, but don't drive by Howell today and hope to see any straight furrow lines out in the field.

I was surprised to find my heart pumping after a few laps up and down the field. The horses do all the heavy lifting, but just walking behind them and keeping the heavy plow upright is hard work. The horses will get stronger as the season goes on, and I'm counting on the same for myself.
Posted by About the Blogger at 9:57 PM

After reading about your first plowing adventure, I can just about smell the good earth. I can't wait to get out into the garden again this spring.

Something you might want to note, being that you are new to farming; There's a difference between dirt and soil. I once read to think of soil as a thin living skin that covers the land.

Sounds difficult. And I couldn't imagine trying to steer both the horses and the plow. I imagine it would take years to develop such a skill. Do you have any idea how long everyone's been working on the farm? I get the impression that all the full-timers have been there for some time. ...