In colder times, I would have spent my day yesterday out on the ice of Howell pond, helping saw the ice crop into 16x24-inch blocks, hooking the blocks to the pulley system on the ice ramp, and finally storing the blocks in sawdust at the bottom of the ice house.

Unfortunately, this winter the ice is only an inch thick.

According to the ice harvesting veterans I spoke to:

Anything less than 4 inches of ice and it's too dangerous to go out there for risk of falling through. During an average ice harvest, the ice is usually 6 or 7 inches thick. To use the horses on the pond, the ice must be at least 10 inches thick. And the best ice harvest anybody could remember was 14 inches.

So there was no ice harvesting yesterday, and the chances of it getting cold enough the rest of the winter to take another crack at it look doubtful, at least according to the long-term forecasts. But I still learned a lot about the practice: 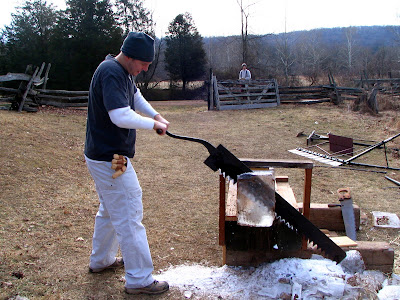 Here's me sawing some domesticated commercial ice, just for kicks. Kind of like shooting fish in a barrel. 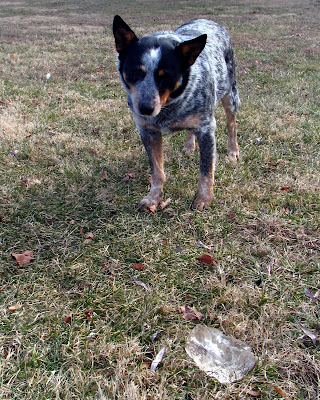 Maggie the farm dog likes to chase chunks of ice. 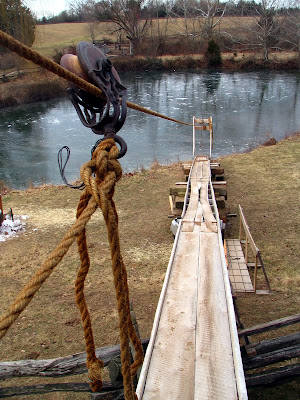 The view down the ice ramp. 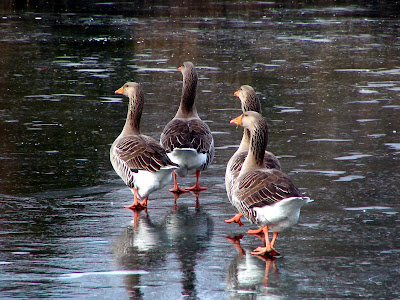 One inch of ice will support the weight of four geese.
Posted by About the Blogger at 7:30 PM

Huh. I know it gets cold in New Jersey, but considering some recent mild winters, I am surprised they harvest ice there. Who are their main customers, or do they use it all on the farm?

Thanks for asking the first official Farmbedded question.

A: Howell tries to operate as much as possible as a farm would have 100 years ago, and a hundred years ago they would have used the ice on the farm to keep milk/butter/meat cold during the summer. And since their ice house would have been filled to capacity before they harvested even half the pond, they likely would have supplied the neighbors with ice as well.

These days I don't think they sell any of the ice, and you're right, recent winters have been getting warmer.

Speaking of warmer winters in the Northeast, here's an AP article from two weeks ago that says average winter temperatures here have increased 2.5 degrees over the past 40 years: