At roughly 3 p.m. today, the orange seat on the back of the roller snapped clean off.

This sundering set off a series of events strange and fearsome. (And, since no one got hurt, I can say this enthusiastically, awesome.)

It started with Farmer Ian, who was working behind two horses out in a distant field. Ian was seated on the back of the roller, crushing clumps of soil. The roller was hitched to Bill and Jess, a cumulative 3,500 pounds of beast.

The seat broke, and Ian hit the ground, falling backwards. Simultaneously, the horses spooked and took off at a breakaway gallop, running faster than I ever thought they could. The roller, still attached to the horses, thundered behind them, urging them on with its noise and momentum.

I watched this runaway train take off from several hundred yards away. The other interns and I were down near the barn, just about ready to call it a day. We all started running in the general direction of the horses, each to the place we thought they might be headed.

As I ran up the trail from the barn towards the visitor center, I watched the horses streak past and enter the parking lot area. Then I couldn't see them anymore for a half minute, but I could hear them as they and the roller smashed across the gravel.

Suddenly the horses reappeared, still sprinting hard and wild. Maybe 50 yards from me now, they turned and continued their charge directly toward me. I was on one side of the small stream that runs through the farm, and they were quickly approaching on the other side. The rumbling was growing louder, and it sounded to me like a movie soundtrack getting ready for something dramatic. No one else was anywhere near yet. I threw my hands up in the air and shouted "Whoa!" hoping this and the natural barrier of water might convince the horses to stop.

With about 25 yards left between them and I, the horses showed no signs of pulling up. I decided to sidestep a few yards up onto the narrow footbridge that crosses over the stream. The amazing thing that happened next is that as the horses reached the stream, which they cross nearly every day, they turned instead for the bridge, which they never cross. In the second I realized that I still wasn't safe, I jumped to the side. The horses crashed onto the wooden planks. SLAMMO!!! The bridge wasn't wide enough for the roller, and the side rails of the bridge ripped off during the collision.

Finally, as the horses reached the end of the bridge, their momentum ran out and they stopped suddenly as the roller became wedged in a jumble of broken wood. I was the first to reach the horses after that. I grabbed Jess's halter just in case, although I don't think those horses were going anywhere at this point. Within 30 seconds the others farmers arrived. They helped hold the horses and started to unhitch them.

No one was hurt, neither Ian nor the horses. The only causalities were two of the vehicles parked in the parking lot, which the horses sideswiped with the roller during their rampage. One of the vehicles was Ian's brand new pickup truck, which ended up with a few small dents. The other was my '93 Camry, a real classic. It's got a smashed rear breaklight, smashed rear blinker, and a cracked bumper.

Picture one was taken on a cell phone shortly after the horses crashed onto the bridge. That's me in blue.

Picture two gives you an idea of my view right before the horses decide to try to cross.

Picture three is the orange seat that broke.

Picture four is my broken car. 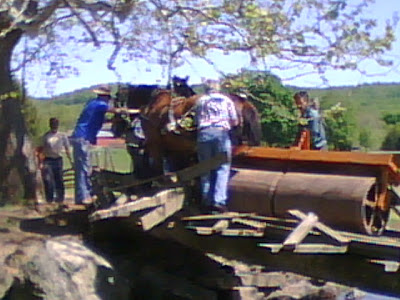 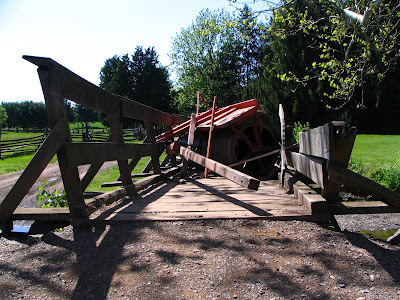 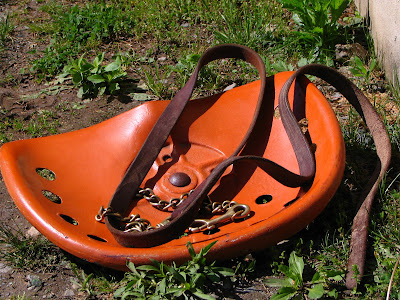 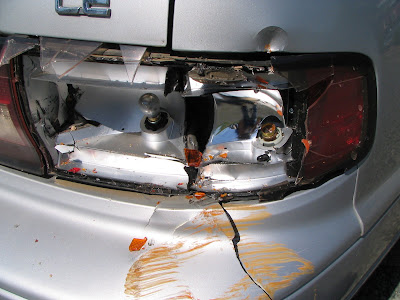 Man, I miss all the fun.